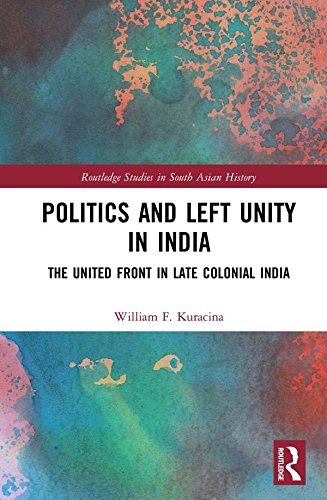 The historical assessments of Left unity in 1930s India misrepresent activities designed to achieve unity. The common treatment of the relationship between Indian socialists and communists emphasizes disunity and the inability to find common ground. Scholarly discussions about unity in fact highlight its impracticality and the inevitability of its failure.

This book proposes that during this moment, for socialists and communists, unity was not just an ideal, but was in fact considered to be a possible and very realizable goal. Rather than focusing exclusively on ideological fissures as the literature does, the book explores the possibilities for unity. The author investigates the United Front as a conceptual framework for collaboration, as a scheme for assessing the extent to which cooperation between socialists and communists was feasible and practicable during the mid-to-late-1930s in India. He employs the notion of United Front as an instrument for identifying and compensating for the prejudices which permeate sources about the cooperation between the Congress Socialist Party (CSP) and the Communist Party of India (CPI).

The author challenges the historicism found in extant scholarly assessments of Left unity by illustrating the ways in which the partners engaged in united front activities and approached the common goal of Left unity despite their fragmented ideological perspectives. The book presents the United Front not as an unsuccessful phase of collaboration, but rather as a concerted attempt to achieve ideological convergence and Left homogeneity which ultimately failed to radicalize Indian nationalism because, in reality, conditions for Left unity did not exist. The book will be of interest to academics studying South Asian history and politics in particular, and socialism, communism, nationalism and imperialism more generally.