MMOs from the Inside Out: The History, Design, Fun, and Art of Massively-multiplayer Online Role-playing Games (English Edition) por Richard A. Bartle 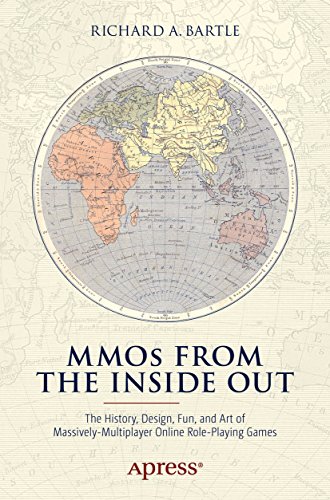 Richard A. Bartle con MMOs from the Inside Out: The History, Design, Fun, and Art of Massively-multiplayer Online Role-playing Games (English Edition)

This is an astonishing collection of ideas, information, and instruction from one of the true pioneers of Massively-Multiplayer Online Role-Playing Games. MMOs from the Inside Out: The History, Design, Fun, and Art of Massively-Multiplayer Role-playing Games speaks to the designers and players of MMOs, taking it as axiomatic that such games are inspirational and boundless forces for good. The aim of this book is to enthuse an up-coming generation of designers, to inspire and educate players and designers-to-be, and to reinvigorate those already working in the field who might be wondering if it’s still all worthwhile.
Playing MMOs is about fun, immersion, and identity. Creating MMOs is about imagination, expression, and art. MMOs are so packed with potential that today's examples are little more than small, pioneering colonies on the shore of a vast, uncharted continent. What wonders wait beyond the horizon? What treasures will explorers bring back to amaze us? MMOs from the Inside Out is for people with a spark of creativity: it pours gasoline on that spark.
It:
What You Will Learn:
Whom This Book is For:
MMOs from the Inside Out is a book for those who wish to know more about game design in general and MMO design in particular. It's for people who play MMOs, for people who design MMOs, and for people who study MMOs. It's for people with a yearning to see beyond the world around them and to make manifest the worlds of their imagination.